Summer is a season of contrasts – the golden yellow of the dried grass in the paddocks, the bright green of the vineyards and the differing colours of the many large trees throughout the garden. This is the time that the lawns, hardy kikuyu, come into their own. Regularly mowed and watered they offset the garden beds and, combined with the dense shady trees, provide a cool environment despite the heat.

There are several golden elms scattered through the garden but one takes pride of place during summer with its huge canopy of soft yellow leaves. This tree was grafted onto a cork elm and deep green cork elm suckers are a constant problem. The other more regular sized golden elms were grafted onto Chinese elms and they have never caused a problem. But we wouldn’t be without our golden giant despite its vagaries. Other trees adding a golden touch to the garden include golden poplars, golden gleditsias, golden ashes, Robinia ‘Frisia’ and a variegated maple.

Another giant, our Taxodium, or swamp cypress, with its delicate looking bright green ferny bipinnate leaves belying its hardiness, is a towering pyramid almost equalled in size by the liquidamber growing nearby. We have a variety of conifers in the garden. One that many people comment on is Cupressus cashmeriana or the Kashmir cypress with long drooping grey foliage. Another weeping cypress growing nearby is Cupressus funebris, the Chinese weeping cypress with light green foliage. Some years ago a friend gave me an Araucaria cunninghamii, or Hoop pine, which ultimately will grow to a huge size – in about 100 years! When we originally bought our property I discounted Araucarias, despite their beauty, because of their slowness to reach maturity. When I was given the Hoop pine I wondered where to place it in the garden and so kept it in a pot for several years where it flourished. After the cottage was built I decided an ideal spot for this majestic tree would be on the western side – some distance away! And here it has done very well, so much so that I have since bought an Araucaria araucana, Monkey puzzle tree, and an Araucaria bidwillii, Bunya pine, and planted them nearby. Time will tell how they all survive.

Clumps of birches are scattered through the garden with their silver trunks offset by the lacy green leaves. In summer the huge claret ash is deep green and casts very welcome shade on the western side of the lake. 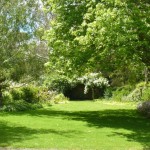 There are several maples in the garden which look beautiful in the summer months with their soft delicate looking foliage. Because our soil is very alkaline we can’t grow the Japanese varieties but there are still plenty of others. A favourite is Acer negundo “Sensation” from North America, a beautifully coloured tree just to the south of the cottage. And near our house the trident maple, Acer buergerianum from China, flourishes along with a large specimen of the silver maple, Acer saccharinum from Canada. 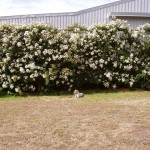 The last of the roses are flowering and many of them are getting ready for their second flush of flowers. Deadheading seems a full time job. This is when the ramblers come into their own. Some only flower late and so in December are putting on a great show. Rosa longicuspis covering the northern end of the wool shed is a mass of white and many of the multiflora hybrids continue into December. Because they only flower once with a grand display, often followed in autumn with a mass of hips, they don’t need pruning, just tidying up and dead wood removed once every few years. With the variety of roses at Camawald there are always plenty of blooms to admire right through the summer months.

Many of the perennials put on a great show – the pure white Shasta daisies, the cheerful red, yellow and mauve alstroemerias, borders of mauve catmint blend with lavender bushes and stately agapanthus hold their blue and white heads high.
← Camawald in Spring